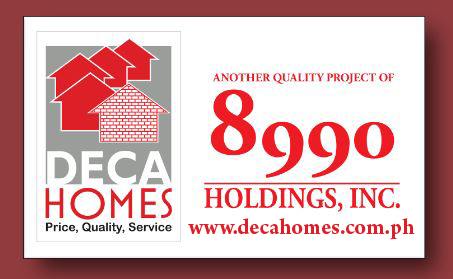 Born out of the commitment to meet a serious housing shortage in the country, 8990 Housing Development Corporation was established in the early 2000 to provide an affordable low-cost mass housing for the Filipinos. Our company visualized a dream that every Filipino should have their own home, hence, 8990 have aimed towards mass producing housing projects popularly known as Deca Homes that are affordable enough to cater to low and middle income earners but rest assured that quality standard of each 8990 project are not compensated.

We strategically select locations not too far away from the city proper making it accessible to transportation and commercial areas. We have also adopted the latest precast wall technology under the supervision of our experienced engineering team to build a durable house with a maximum of 8 days construction time. And finally, patterned from the Home Development Mutual Fund (PagIBIG) system, we developed a first in the county an in-house financing known as CTS Gold that allows buyers to have a sustainable payment scheme to purchase their own homes up to 25 years.

Our consistency on building quality homes and improving better services eventually bore fruit and expanded our presence across the nation. As we progressed, 8990 has also extended its vision into building mid-rise condominium under the brand name of Urban Deca Homes and a high rise condominium under the brand name of Urban Deca Tower. In addition to, a mall partnership and an internet and cable service known as DECA Homenet, are also in the process of implementation into providing convenience for every household. On top of our achievements, we are also proud to declare that 8990 Holdings Inc. was formally recognized in 2013 and was fully granted an Initial Public offering (IPO) on May 2014.

Yet despite of our triumphs and successes, 8990 has kept its feet on the ground and remain true to our promise to continue our mission on building quality and affordable houses for an ordinary Filipino salary earner. This position of strength has enabled us to expand our developments and think more ways to make our homeowners satisfied with their investments that they can live in and can call their own house a "home".

Truly, 8990 Holdings is upholding its mission of HOUSING THE FILIPINO PEOPLE.